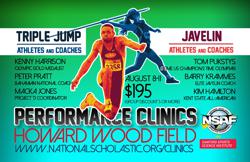 SIOUX FALLS, S.D. –  The Sanford Sports Science Institute and the National Scholastic Athletics Foundation are hosting performance clinics and testing for triple jumpers and javelin throwers Aug. 7-11, bringing in some of the nation’s top coaches and elite prep athletes in those events to train.

This is the third year the testing and clinics will take place in Sioux Falls. Two years ago, Sanford Health began its partnership with the NSAF to become the non-profit organization’s exclusive national sports medicine research partner.

Through this five-year collaboration, Sanford Health will conduct research in conjunction with the NSAF to help with the development of future Olympic hopefuls and improve the health, safety and performance of all NSAF athletes. The partnership will last through 2021.

Among the NSAF’s elite athletes who will be training in Sioux Falls are Sam Hankins and Katelyn Fairchild. Hankins (Manhattan, Kansas) was the 2019 Howard Wood Dakota Relays javelin champion and both he and Fairchild (Andale, Kansas) won Kansas Relays titles this past spring. The triple jump attendees include Missouri state champ Riley Burger (Cape Girardeau, Missouri), who last year in Sanford Sports Science Institute testing achieved the highest-ever Sanford SCORE for any athlete, male or female, amateur or professional.

The performance clinics will provide indoor and outdoor training, as well as classroom instruction. The cost of each clinic is $195.

Additional charges will apply to athletes wishing to undergo performance testing at the Pentagon and Fieldhouse. Call 605-312-7800 for information about those services.