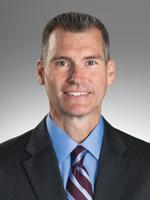 (Sioux Falls, SD) – The former head strength and conditioning coach for the University of Wisconsin men’s basketball program has joined Sanford POWER as its new manager. Scott Hettenbach, CSCS, began his duties last month after 19 years on staff at Wisconsin.

Most recently the associate director of sports conditioning at Wisconsin, Hettenbach led strength and conditioning efforts for the Badger men’s basketball program from 1995 to 2013. He oversaw all facets of strength, speed, agility, conditioning, testing, recovery and nutrition and worked with team physicians on injury prevention and return to play protocol and progressions.

In addition to his duties with men’s basketball, Hettenbach also worked with football, women’s basketball, women’s volleyball, men’s soccer track and field, golf and swimming at various points in his career with the Badgers. He was also served as Wisconsin’s sports nutrition coordinator from 1994 to 1996, managing all aspects of nutrition education and supplementation for more than 700 athletes.

Men’s basketball teams Hettenbach was associated with at Wisconsin made 15 consecutive NCAA tournament appearances, including a visit to the Final Four in 2000, and won three Big Ten titles.  He coached numerous NBA, NFL, NHL and Olympic athletes while with the Badgers.  Among that group are current NBA players Devin Harris, Michael Finley, Alondo Tucker and Jon Leuer.

About Sanford Health
Sanford Health is an integrated health system headquartered in the Dakotas and is now the largest, rural, not-for-profit health care system in the nation with locations in 126 communities in nine states. In addition, Sanford Health is in the process of developing international clinics in Ghana, Israel and Mexico.

Sanford Health includes 39 hospitals, 140 clinic locations and 1,360 physicians in 81 specialty areas of medicine. With more than 26,000 employees, Sanford Health is the largest employer in North and South Dakota. The system is experiencing dynamic growth and development in conjunction with Denny Sanford's nearly $700 million in gifts, the largest ever to a health care organization in America. These gifts are making possible the implementation of several initiatives including global children's clinics, multiple research centers and finding cures for type 1 diabetes and breast cancer. For more information, please visit sanfordhealth.org.