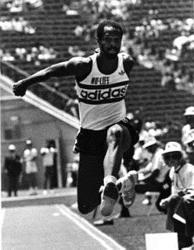 Banks set the world record in the triple jump in 1985 when he won the national championships with a leap of 17.97 meters. The record stood for more than 10 years. Banks was also a member of the 1984 and 1988 U.S. Olympic teams.

Banks will join several other Olympians as well as elite athletes and coaches at the NSAF Performance Clinics for both Project Javelin Gold and Project Triple Jump. One of the ongoing goals of the NSAF is to foster future Olympic and world championship medalists through these clinics.

The Sanford Sports Science Institute is the exclusive national sports medicine research partner for the NSAF. Through a five-year collaboration, Sanford Health will conduct research in conjunction with the NSAF to help with the development of future Olympic hopefuls and improve the health, safety and performance of all NSAF athletes.

“This is an opportunity for us to work with high school athletes who one day will be representing the United States on the biggest athletic stages in the world,” said Dr. Lisa MacFadden, Director of the Sanford Sports Science Institute. “We are excited to demonstrate how our team can help these athletes achieve their dreams.”

The performance clinics are open to athletes and coaches of all levels. Register for the event at nationalscholastic.org/clinics. The cost is $175. There is a group discount for five or more.