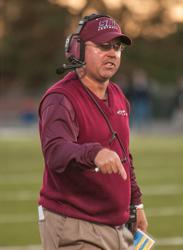 It is open to football coaches in all states and will feature a series of breakout sessions, networking opportunities and the high-profile speakers.

Bringing in Chizik is part of the partnership between Sanford POWER-Riggs Premier Football Academy and Brookings FCA that started at last year’s event.

“Last year’s revamped format was well-received by the attendees,” said Kurtiss Riggs, director of the Sanford POWER-Riggs Premier Football Academy. “We’re excited to continue to bring together some of the best coaches in the region, and have our speakers see one of the best FCS programs in the country.”

South Dakota State University football coaches will present at the clinic, and attendees are invited to watch a session of SDSU’s spring practice.

“SDFBCA is excited to continue the partnership started last year. The new format proved to be fun and informational,” said Virg Polak, SDFBCA secretary. “I know it will be a great experience for all the football coaches that come.”

Registration information can be found at sdhsca.org/sdfbca.