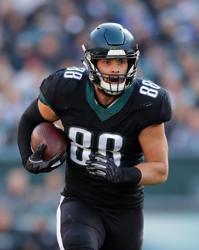 SIOUX FALLS, S.D. – After years of close ties to Sanford Health, Philadelphia Eagles tight end Dallas Goedert has signed an endorsement contract with the integrated health system based in his home state.

Goedert, a native of Britton, South Dakota, was selected in the second round of the 2018 NFL Draft by the Philadelphia Eagles. In his rookie season, he made 33 catches for 334 yards with four touchdowns, helping the Eagles reach the Divisional Round of the playoffs.

“I’m honored to join the team at Sanford Health,” Goedert said. “During my time in college, I became very familiar with the Sanford medical staff and their state-of-the-art facilities. Their commitment to our community and the athletes in our region has been very impressive. I’m extremely happy to join their roster of amazing athletes.”

Sanford Health is the exclusive sports medicine provider for South Dakota State University. Goedert holds a number of accolades at SDSU, including most receptions in a season and ranks near the top in all statistical receiving categories.

Goedert will be involved in a variety of elements of Sanford Health, including Sanford POWER, the Sanford Sports Science Institute and Sanford Orthopedics and Sports Medicine.

“Dallas’s athleticism will make him one of the best tight ends in the NFL,” said Chad Kurtenbach, M.D., of Sanford Orthopedics and Sports Medicine and SDSU’s team physician. “Watching him beat up on MVFC opponents has been exciting, but I’m excited to see him take it to the next level. He’s been a part of the Sanford team for the past four years, and I’m glad he’s going to be with us for the years to come.”